Rough consensus, or, hmmmm, is humming good for consensus? 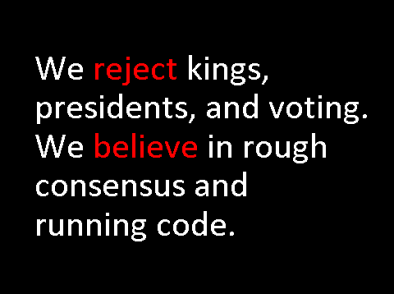 I came across the notion of ‘rough consensus’ only recently. It is used by the Internet Engineering Task Force (IETF), a large, self-organised, international community of network designers, operators, vendors, and researchers. It is the principal body that develops new Internet standards, which are voluntary. It is open to any interested individual. It has no board of directors, no members, and no dues.

The IETF mainly exists as a collection of events. It meets three times a year, with over 1,000 people on each occasion. Most of its activity is in Working Groups, of which there are over 100. These operate via mailing lists as well as by face to face meetings at the events.

Before explaining what rough consensus is, I should say why they use consensus at all. They found that voting was both difficult and undesirable. It was difficult because with no membership it was nearly impossible to work out who should get a vote for any given question. It was undesirable because it led to gaming of the system (such as ‘vote stuffing’ – recruiting lots of people to vote for you), important minority views being ignored and poor technical outcomes. 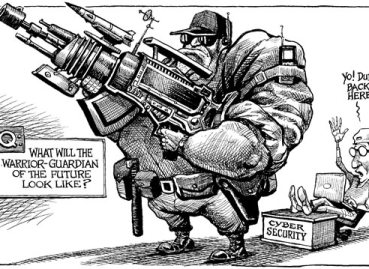 They call it ‘rough consensus’ because they don’t go for full consensus, on the basis that this allows “a single intransigent person who simply keeps saying ‘No!’ to stop the process cold.” What they mean by rough consensus is that strongly held objections are debated until most people are satisfied that these objections are wrong or should not be accommodated. So you can have rough consensus where such objections have been consciously dismissed, but not where they have been ignored.

To illustrate the point about accommodation, there might be an objection to a proposed solution that everyone acknowledges to be valid, but the vast majority of the working group believes that accommodating the objection is not worth the effort involved in fixing the problem.

If there is someone whose concern is not going to be accommodated, rough consensus also that they be given a reasoned explanation as to why.

They see dealing with these objections as more important than the level of agreement. A long discussion might lead a minority to feel that it isn’t going to get its way. As a result, it agrees to go along with the majority. There might then be 100% agreement to a proposal. But if there is an objection to that proposal that has not been addressed, it would be wrong to take even this level of agreement as consensus.

It is this lack of connection between rough consensus and the number of people for and against that those involved with the IETF find it hardest to get their heads around.

What this implies for the process

Successful rough consensus relies heavily on the good judgement of the consensus caller, usually the chair of the working group. What the chair must not do is to assert that rough consensus has been achieved simply because lots of people say, “The objection isn’t valid.” That would be equivalent to taking a vote. People need to justify their views, so that the objection can be understood and evaluated..

It follows that asking “Can anyone not live with choice A?” is a better question than “Is anyone not OK with choice A?” because it draws out objections that people feel strongly about. But, there is of course an essential follow up question: “Why do you object to choice A?”.

Sometimes the chair of a working group wants to take the temperature of the room in a face-to-face meeting. They will ask people to hum on a particular question, either “for” or “against”. Sometimes the hum tells the chair that an issue isn’t that contentious after all, that apparent widespread objection during an initial discussion was just a few people being vociferous. Or, a smaller number of loud hums for choice A and a larger number of quieter hums for choice B might show that, although B is more popular in terms of numbers, some people believe that there are serious problems with it. The chair wants to find the option with the fewest objections as quickly as possible, and the humming helps.

The other reason for using humming is that it doesn’t feel like voting – which brings us back to where we started.